Cultivating New Forms of Life in the Media

MEME BREEDERS attempts to extract a few nerves from a living culture and hang them together in a room. The nerves themselves are an assortment of posters, fanzines, albums, and other communication devices produced by a new generation of cultural activists. Their efforts go far beyond the making of pretty objects, extending into the media, and into the minds and onto the bodies of the public. This practice is a kind of media dance. If the dance is successful, the creators' images and words will begin to replicate in society's webs of communication.

In light of recent ecological theories of culture, these artists may be some of the first to consciously manipulate the media and the public in order to "breed" their creations. Although it may not be the language shared by all the artists in the show, the replicating entities represented here are what "cultural biologists" are beginning to call "memes," or primitive media organisms.

20th Century Western art theories have usually bound culture to the large-brained, bipedal creatures who manufactured it. Surrealism explored the realm of the human unconscious. Expressionism passionately attempted to release the human psyche into form. Pop art and minimalism flirted with serial processes of corporate mass production. Multiculturalism and gender theories have both solidly championed a wider definition of the human, and threaded throughout its theories a critique of human systems of power. Even postmodernism, and good old madness itself, can be construed as struggles with human power, human dreamspace, and human alienation. Many of these cultural theories have included attempts to transcend the human, but their effect in practice has been to reinforce a mainstream HUMANIST subplot running along the spine of history.

Exit art, enter ecology. With the recent emergence of ecological theories of culture and technology, the human dream may be fragmenting and mutating into a multitude of very different creatures. Culture may not be a simple collection of songs and sculptures, but may grow in our minds like a host of alien species. From an objective standpoint this poses a challenge to our humanist tradition. Subjectively, it is delightfully obscene. A form of "hyperzoology" may be emerging. Collectively shared media organisms replace the art object as the focus of aesthetic attention. That which seems to wiggle becomes a new definition of beauty.

The evolutionary biologist, Richard Dawkins, coined the term "meme" in 1976, to launch a theory of culture which built upon the enduring successes of Darwin's theory of evolution. A meme, according to Dawkins, is a "unit of cultural transmission."1 It's a little memory nugget analogous to a gene. It replicates, not in the strict genetic sense, but more loosely within the mental environment of our species. In other words, a meme contains a "code" which replicates in the minds of humans, alters behaviour, which further aids in the propagation of the meme. Media, from gossip to literature to satellites, is the fertile field that sustains these new lifeforms. Again, Dawkins:

Culture, for centuries the province of poets, pundits, and priests, is now being colonized by zealous biologists. Within the websites dedicated to memes now growing throughout the internet, terms like "infection strategy" and "immuno-depressent" are nudging out more literary terms like "propaganda" and "naivete." The realm of cultural catfights, subjectivity, and sublime madness is being agitated by the steely blue fingers of empiricism. Dawkins quotes his colleague, N.K. Humphrey:

"Memes should be regarded as living structures, not just metaphorically, but technically. When you plant a fertile meme in my mind you literally parasitize my brain, turning it into a vehicle for the meme's propagation in just the way that a virus may parasitize the genetic mechanism of a host cell." 3

But before we join the memetic feeding frenzy, I suggest we reactivate Public Enemy's immunity meme, "Don't Believe the Hype," to create some critical distance. In one sense intellectual history can be seen as a series of ever-changing metaphors. The current meme metaphor intrigues me, not for its accuracy, but its ability to foster a deeper appreciation for a more organic kind of cultural production. It allows us to replace the word "production" with the post-industrial word "cultivation" or perhaps "breeding." The factory is replaced by the farm. Crafting masterpieces is replaced by nurturing living media processes. A warmer, more flexible, more decentralized, and more interactive culture is implied.


THE MEME AS A NEW METAPHOR

Although numerous countercultures and bohemian circles have often stressed a wholistic view of culture --a kind of ecological conflux of artist, audience, medium, and context --the breeding principle tends to be more propagandistic and "hacker" in attitude. The role of the artist is clearly that of pollinator. But it is, nevertheless, an organic pollination, consisting of numerous and varied injections of an image, sound, or gesture into the webs of culture. Often the work flexes and adapts to its audience like an organism to its niche.

A considerable number of artists are emerging who seem quite comfortable with this organic, weblike view of cultural space. For one thing, they have grown up with the cross-marketing, multimedia webs of our expanding consumer culture. They have also found many points of entry amidst the increasing number of fanzines, magazines, cable TV stations, the internet, and telephone machines. From the xerox machine to the world wide web, do-it-yourself media has never been more accessible. Kinkos Photocopy shops inadvertently sponsor tiny publishing revolutions on a convenient 24-hour basis. There's even a magazine, Fact Sheet 5, which is entirely dedicated to championing this do-it-yourself culture.

Furthermore, the new generation of media artists have absorbed the lessons taught by earlier "breeders," including the Beatles, Abbie Hoffman, Andy Warhol, the activist group, ACT UP, and Spike Lee. Consider the film title "Do the Right Thing." Mr. Lee took an old soundbite out of hibernation and gave it a new life in the streets and in the media. I just saw it bubble up again in a New York Times article. Mr. Lee has been called a marketing genius by many people in the press, but to me he represents a stellar meme breeder.

MEME BREEDERS explores a number of artists whose work has penetrated the media and the collective imagination. What's important in this exhibit is not the actual t-shirts and posters which are on display, but the way they have induced waves of responses in the public mind. These works aren't always perfectly crafted gestures, but then again, something which ultimately lives in the mind cannot be crafted. It creeps around like a weed.

GH HOVAGIMYAN's striking poster for the New York Metropolitan Transportation Authority which made use of slang, advertising style, and an absurd-looking clown doll created a major copyright controversy. Hovagimyan's image of the clown bore a vague resemblance to "Bozo the Clown" whose copyright is owned by Larry Harmon. Harmon attempted to sue the MTA for copyright infringement, prompting a brief outbreak of memetic replication of the clown meme in the media. Hovagimyan's offending image and many of the legal documents and publicity surrounding this event will be on display.

The RIOT GRRRLS are circulating fanzines, t-shirts, and buttons with a freckled meme in pig tails. It she just another funky white trash kind of gal? A random assemblage of human features? Pippi Longstocking? How about a vast cultural apparition who just won't go away because certain somebodies keep reproducing her image. After countless dull storytelling sessions about pretty princes and princesses, it was discovered that if you stick a surly, can-do girl with pigtails in the story, your audience perks up. And now, if the quasi-feminist Riot Grrrl movement has its way, the kid is going to kick around a good while longer, along with a flock of other Grrrl memes.

The name itself is a successful meme -that freaky-cute triple-r growl has hooked a lot of people's attention, and helped to jump the movement into the media almost a little too fast, partly with the help of the mainstream magazine, Sassy, and bands such as Bikini Kill, Huggy Bear, and Bratmobile. Many of the bands who helped launch the movement have had to distance themselves at times in order to keep their own meme creations from being drowned out by the Grrrl memes. After a few encounters with some very sincere 15 year-old Riot Grrrls who took over downtown Manhattan's Meow Mix club recently, it is clear to this author that the movement is very deeply connected with an ancient meme-complex known as civil rights.


Representing the anti-copyright school of meme breeding are MARK PAWSON from London, and LLOYD DUNN from Iowa City. Both artists have produced a variety of publications like Photostatic and Yawn that represent the activities of an entire commmunity of media cultivators. Dunn's perturbing trademark on the word plagiarism, and Pawson's N© design have replicated numerous times in the underground media.

Shadow memes from India's Mahabarata will make their soft presence felt on the gallery walls. A few of DAN MCQUIRE's Balinese and Javanese shadow puppets will be presented along with McGuire's own variations. These translucent, serpentine cut-outs are passed down from generation to generation through a precise tracing of the originals, not unlike genes themselves. McGuire has adapted these puppets to a North American cultural niche by hybridizing the ancient designs with comic book characters. Both generations of memes will be shown.

NEGATIVLAND is one of the more audacious meme breeders in this show. The band's apt name, and a handful of its slogans and song titles, underwent an uncanny breeding explosion after a satirical press release associated them with the suicide of a teenager. Later, a parody of a U2 album cover brought them into a legal fray which spawned another round of memetic propagation. The content of their music, and the contorted methods by which it has been popularized, folds nicely together into a large meme complex.

MINDFLUX is a group of meme breeders from Australia whose memetic "pollen" I first found unexpectedly in my computer's hard drive. Mindflux actually wield the term "meme" as though it confers a blessing or two on their operation. Very confidently they describe their mission as such:

1. Producing and observing specific effects with engineered memetic agents. 2. Providing a conduit thru which memes can reproduce in suitable environment. 3. Provide antigens to malignant memetic parasitism. 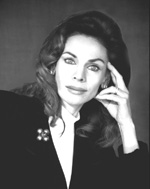 NATASHA VITA MORE's memes, like those of Mindflux, are also consciously designed with meme theory in mind. Her own lexicon of memes is inspired by her enthusiasm for "Extropian" philosophies of continuous cultural and material increase. For example, her response to the term "cool" - a dominant meme she believes has been over-bred - is countered with the word "cryo" culled from the term cryogenic, which is itself an element within the entire Extropian meme-complex.

And finally we include samples of media from the rap group, PUBLIC ENEMY, one of the most impressive group of media artists in recent history. As early experimenters with turntables, samplers, tapes, and signal processors, Public Enemy instigated many waves of response to their music and stage performances. Memes they have fertilized within the popular culture include such phrases as "Don't believe the hype," and "Fight the power." Each of these statements were teased into public consciousness through a supple, interactive, rhythmic exchange between performers and technology.

All of these creators, in a variety of ways, are helping to push the way towards an interactive, organic, and post-humanist vision of culture. In this light, the public is welcome to bring its own memetic agents to the show and post them on a reserved section of the gallery. We look forward to your soundbytes, slant-eyed alien faces, and Andre The Giant stickers.