Bodies moving freely in a dark room triggered projections of computer-generated structures, some pointing to other structures. The exhibit, "Heat-Seeking Psycho-Suctions," included 14  projections, two of which were accompanied by pulsing sound.

ABOVE: Other Media Organisms from the Same Exhibit. To purchase a Media Organism meant adopting the underlying code and taking on the responsibility for its manifestations and propagation.

Exploring media rituals in Williamsburg, Brooklyn, in the early 1990s, Fisher began to encode the resulting flows of images and information in a series of iconic diagrams. These lead to Fisher's exhibit at Test-Site. In turn, the computer code expressed in the Test-Site projections was transformed into Fisher's first "mature" bionic code, "EQUALIZE WITH OTHER BEINGS" (above). This code, and many like it, has floated in a variety of media throughout the world. The Bionic Codes were eventually cultivated into Zoacodes.

BELOW:  Bionic Codes at the Krannert Art Museum exhibition "Out of Town: The Williamsburg Paradigm," curated by Jonathan Fineberg of the University of Illinois, 1993.

Plan for "System for Equalizing Heterosexuals"

Entering this room triggered a strobe light which revealed a blood-red room and a recorded voice intoning "remember." On the pedastol a strobe flickered behind a Bionic Code with the text, "EQUALIZE SEDUCTION." (Voice: Megan Raddant).

Entering this room triggered a deep pulsing sound and the projection of a Bionic Code on the floor. A diagram of a human heart appeared dimly in the background. 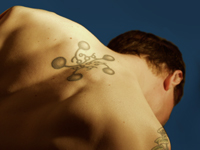 LEFT: Projection of "EXALT IN RANDOM CONNECTIONS" at Substation, a multimedia rave in the old Warhol Ballroom, New York, 1997.

RIGHT: Environmental Anthropologist, Erich Schienke, with a tattoo of the same code, which he first encountered in Wired Magazine. The text component of the code is stored in his mind.

Projections in other New York venues included The Limelight, El Sensorium, Room Temperature, Galapagos, The Kitchen, and a rave in the Brooklyn Anchorage.

"ORBIT PROBES VIA MUTUAL SPIN" tattooed on the shoulder of Canadian biker/programmer Geoff Wilson. Wilson, from British Columbia, first encountered the bionic codes over the internet.

Bionic Codes worked into diagrams of computer networks in
the Wall Street Journal, 1994.

Bionic Codes on T-shirts and stickers, 1996 and 1994.
"LINK WITH DISTRESSED HUMANS" on Hafsa Ibrahim,
Williamsburg, Brooklyn.